It is immensely useful, if not imperative, that we understand the political spectrum when evaluating and accurately defining policies that affect us. It often helps to clarify the aim of these policies whether they are Left or Right.  The most straightforward and accurate “Left/Right” definition places collectivism as the defining value on the Left and its opposite, individualism, the defining value for the Right. There are, however, other foundational values that underscore the differences between the two sides of the political spectrum. These are developed in the following discussion.

The Left:
The ideology of communism as posited by Karl Marx in the “Communist Manifesto” (and his other literary creations) lay out the defining values of the Left. In the Marx's utopia, the proletariat (the poor working class) has violently overthrown the capitalist bourgeois that “stole” their labor to make profits. A perfect egalitarian society is achieved where everybody is perfectly 'equal in outcome' and the workers own the means of production. On the way to this ideal, however, it is necessary for the government to intervene until the optimal utopian society is achieved.  These ideals require sacrifice of the individual for the sake of the group. As Marx put it: “From each according to his ability, to each according to his needs.” This underscores two of the three primary values of the Left: Altruism (self sacrifice), the moral belief that someone else's need places a claim on your money, time and effort; Collectivism, the belief that the individual must subordinate to the will of the group and that so-called "group rights" supersede individual rights.

Finally, Egalitarianism is the belief in the perfect 'equality-of-outcome'. The egalitarians of the Left  believe that if any inequality-of-outcome exists, some injustice must have been perpetrated against those who have less (i.e., a 'zero-sum' game economic system). To atone for this perceived injustice, the Left adopts an economical redistributive system, accurately called "Redistributivism" but often called Socialism.  Since most rational, self-interested individuals would not voluntarily adopt these values which destroy individual incentive and liberty, they must be coercively enforced by government.  This can be seen, for example, by the necessity of Soviet era communist governments to deploy an “Iron Curtain” around their countries to prevent citizens from leaving and seeking freedom and by the fact that historically all socialist schemes devolve into authoritarian tyranny in order to force compliance by those who seek freedom.

“STATISM” refers to the concentration of both political and economic power in a central government. In a statist society, central planners dictate rules and regulations for all (or most) aspects of the lives of the individuals within that society. There is no room for individual liberty. Burdensome confiscatory taxes are levied in order to collect the revenues needed to run the ever-growing government. Statism is the hallmark feature and final outcome of the philosophy of the Left.
​
The Left demands subordination to the state, thus disregarding individual rights and liberty. The central planners (elites) primary mission is to control and manipulate society through “social engineering” in the manner they deem appropriate and in accordance to their own moral view. They justify their coercive laws and rules by claiming it is done in the name of "social justice" and for the "common good". Under socialism the only group that is better off are those who do not want to work; everyone else is worse off (except those at the top who run the government bureaucracies).


The Right:
What then are the values of the Right? Quite simply, the values of the RIGHT should be exactly opposite of those of the LEFT. So instead of self sacrifice for the "group" or "general will of the people",  the Right values rational self-interest. Specifically, this underscores the principal that one’s chief moral value is to lead the most fulfilling and flourishing life possible. Instead of collectivism, the right values individualism, the principal that the rights of the individual are not subordinate to the group or state. Instead of egalitarianism which leads to a socialist economic system, the right values free-market capitalism, which gives individuals the freedom to engage in productive economic activities and voluntary trade that allow them to flourish and improve their individual quality of life.

Note the critics of individualism often state that it leads to classically "selfish", isolated individuals who are self-aggrandizing and miserable. Nothing could be further from the truth. Establishing intimate social networks and belonging to associations as well as active engagement in charitable work can all be consistent with individualism if these activities help one lead a fulfilling life. The point is that they do not become burdensome and obligatory, driven by a collectivistic need to sacrifice oneself "for the greater good" (the mantra of the Left). For example, many on the Left do not consider charity authentic unless one makes a sacrifice that actually leaves oneself worse off. This is classic collectivism as preached by the tenets of socialism & communism.

Another important point about individualism is that "classic selfishness", the way we are brought up to understand it, refers to behaviors ostensibly meant to advance one's position such as lying, cheating, and stealing. But ultimately these are all detrimental to the individual and, therefore, not consistent with the principles of individualism. A rationally self-interested individual patently rejects these behaviors.


For the Right, the essential role government plays is to protect individual rights, not to socially engineer. This allows and incentivizes society to grow, flourish, innovate, and create wealth, which improves the general quality of life for all members of society. As put so eloquently and succinctly by founding father, Thomas Jefferson, in the Declaration of Independence: individuals have the right to “pursue life, liberty & happiness”. Liberty is the hallmark feature of the philosophy on the Right. Thus, the three pillars of a free and prosperous society, as defined by the Right, are: Individual Liberty, Limited Government, and Free-Market Capitalism.


The Greatest Political Fallacy Of All: The Political Extremes
We have all been told through media and other sources (including higher institutions of learning) that with regard to political extremes, communism and pure socialism occupy the far left while Nazism and Fascism occupy the far right. While it is true communism/socialism does deserve its place on the far left of the political spectrum, the notion or idea that Nazism and Fascism are far right political ideologies is absurd. The debate should be settled instantly just by investigating what the acronym "Nazi" denotes. The word “Nazi” stands for the National Socialist Workers Party.  In other words, the Nazi’s are explicitly socialists (i.e, they are firmly on the left). It doesn’t take much analysis to realize Nazis and Fascists hold collectivistic and statist ideologies; that is, they value group identity over the individual and concentrate power into one over-arching and coercive central authoritative government. In addition, a simple inspection of the political spectrum (see below) also yields the truth. Specifically, since the “right” side of the spectrum tends toward less government, then logically the “extreme right” would be NO GOVERNMENT, also referred to as “Anarchy”*. But Nazi’s and Fascist are the exact opposite since they concentrate power into the hands of a few in an authoritarian government which controls all aspects of society (regulating businesses, speech,  etc.). This authoritarian statism is the hallmark of the “far left” Thus, on the left where the notion of “more government” is carried to its logical extreme, we have “Totalitarianism” (communism, socialism, Nazism, fascism).

​Fascist leader Benito Mussolini left no doubt about the explicit "leftist" nature of Fascism in speech he made in Milan on April 22, 1945:

“Our programs are definitely equal to our revolutionary ideas and they belong to what in democratic regime is called “left”; our institutions are a direct result of our programs and our ideal is the Labor State. In this case there can be no doubt: we are the working class in struggle for life and death, against capitalism. We are the revolutionaries in search of a new order. If this is so, to invoke help from the bourgeoisie by waving the red peril is an absurdity. The real scarecrow, the real danger, the threat against which we fight relentlessly, comes from the right." - Fascist leader Benito Mussolini , April 22, 1945

*Note that the so-called “anarchists“ who have caused destruction and mayhem at global trade conferences in recent years are in fact NOT ANARCHISTS. They use anarchy as a tool with the sole purpose of destroying our current system and replacing it with their own communist/socialist utopia (in other words coercive big government which is the opposite of anarchy). They now take on another deceptive moniker calling themselves “Antifa” or "Anti-fascists"; yet they cover their faces and commit violent assaults on those they disagree with, shut down free speech, destroy property and create general chaos just as the fascists they claim to oppose did in 1930's Germany. 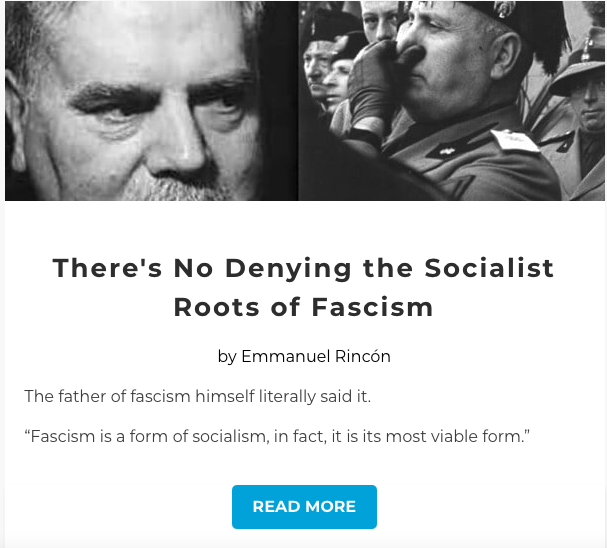 Mike Heller with a little help from Dennis Prager:

(The Right vs Left) continuum describes how a person sees life, and their role in it.  At one end of the spectrum (the Right), individuals are strong, can make good or bad choices, and are responsible for their own actions.   When things go wrong, they ask “what can I do to improve this situation?”  This view was widely held among our nation’s founders.

At the other extreme (the Left), individuals are weak, helpless, and victims of various outside forces.  When things go wrong, they ask “who (or what) do I blame for this?”

(Note this is not a religious matter, but there are interesting similarities. The Judeo-Christian tradition – and parallels in Buddhism, Islam, and Hinduism --  teaches that man is routinely tempted by various evils, but always holds the power to choose right or wrong.  Each individual strives to improve himself and become decent, strong, courageous, and self-controlled.  But those who don’t share such traditions usually believe man’s struggle is not with himself and his choices, but with ‘outside forces.’)

You will find those who always look to outside powers as responsible for their pains tend to be unhappy, ungrateful, and mean-spirited  --  exactly the type of individuals you see rioting, the type of elected officials who don’t stop the rioters, and the type of academic and media elite who promote this viewpoint.

In our contemporary political climate, it’s easy to see why the left encourages practically every group of people (excepting, of course, white, religious, heterosexual men!) to regard themselves as oppressed, since the more they are alienated from America and its founding values, the more they might gravitate left.

Other real-life examples you can notice along the continuum:
-people are seen as individuals (Right),  vs.  people are always seen as part of a group (Left)

-the nuclear family has advantages for society as well as its members (Right), vs.  families (and men) are not important (Left)

-people volunteer to help in emergencies (Right),  vs.  look only to the government in such times (Left)

-there is a right and wrong in every situation(Right) ,  vs.  everything is relative, with no absolute standards (Left)

-competition is a good thing and encourages improvement (Right),  vs.  reward everyone for participation (Left)

-choice is good (Right),  vs.  everyone must go to the same public school, have the same government health plan, etc. (Left)

-children should learn to be responsible individuals (Right),  vs.  adults should always be permissive (Left)

-the rule of law is vital to a civil society (Right),  vs.  the loudest voices of the mob must be heard (Left)

-a common language and culture help us succeed (Right),  vs.  diversity and multi-lingualism are most important (Left)
​
-our country is close to unique in the world’s history (Right),  vs.  all countries are similar and we are ‘world citizens’ (Left)
From "Democrat's & Republicans Contrasted" by Bonnie M. Parsley: 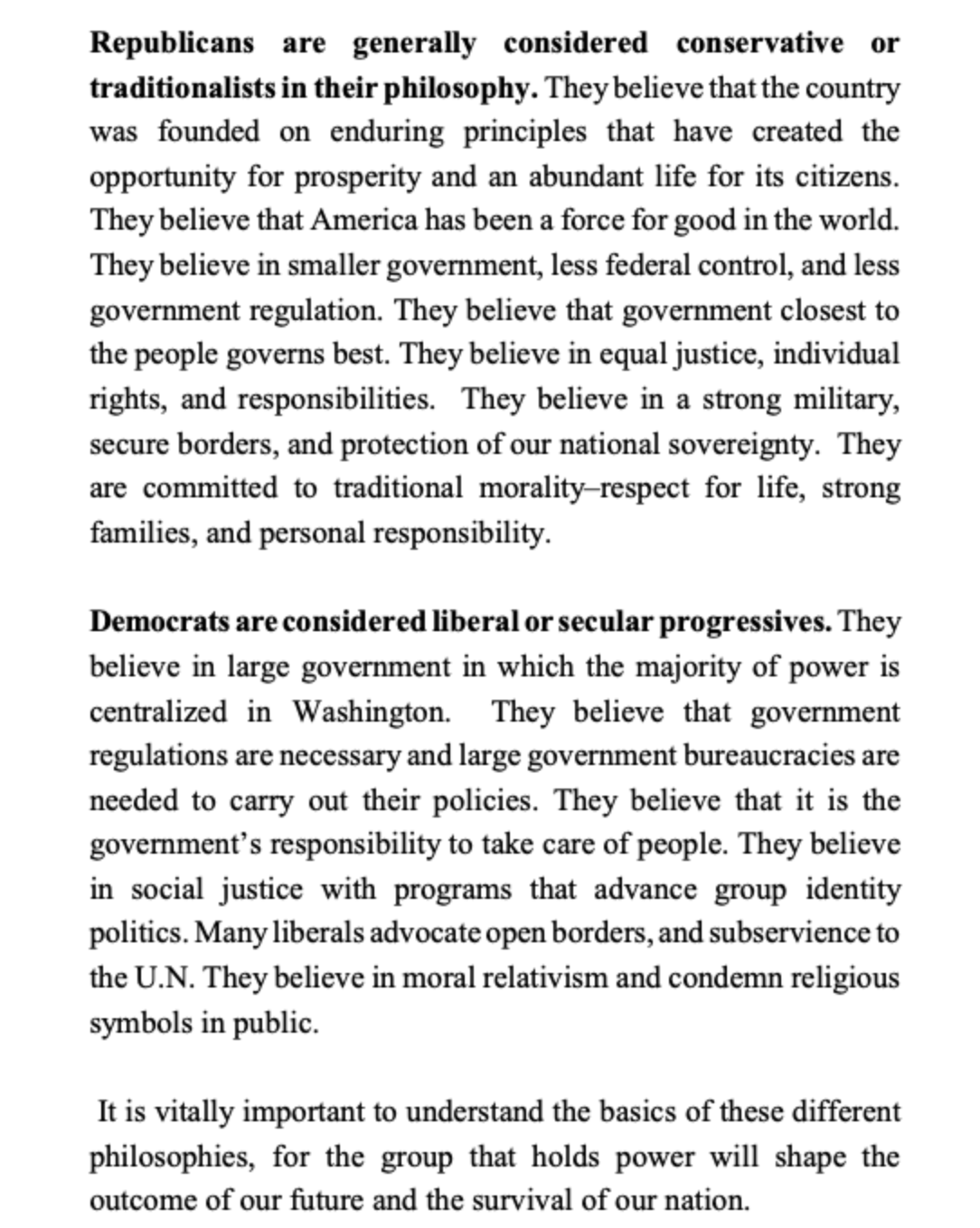